Metaverse – A Throwback to the 90s

Here’s what I think of the whole Metaverse thing, and no, nobody asked, but hey.

In October 2021, Mark Zuckerberg announced that Facebook will now be known as Meta, much to the dismay of smaller companies already named Meta.

Regardless, in a matter of minutes, the term “metaverse” enters our standard tech lexicon and everyone in the tech (and stock market) space is talking about it.

What is a Metaverse In the First Place?

Let’s be clear, at the moment, no company technically owns the word or term “metaverse”. Think of how we use “the internet” or “cyberspace”, the metaverse is the same. Facebook simply opted to make the first part its brand name.

The next logical question would be, what does “meta” mean? I’ll leave that to Oxford to define, particularly, as an adjective:

(of a creative work) referring to itself or to the conventions of its genre; self-referential.
“the enterprise is inherently ‘meta’, since it doesn’t review movies, for example, it reviews the reviewers who review movies”

Nope, not one of my favorite NBA players to watch, Ron.

For Facebook, Zuck spent over an hour confusing us with what the metaverse is according to Facebook.

As layman as he tried to make it, I think it’s still a tech jargon party for most, but if you have an hour to waste, go check out the video below.

As a geek, I loved it and it brought back so many memories from 1993.

I honestly think that the 90s to mid-2000s were the most exciting tech days for any geek. While there’s no doubt that today’s tech is superior, just by virtue of Moore’s law, today’s tech has gone sterile, too utilitarian, and pretty much just the same thing over and over with marginal differences.

We’ve seen this with cars, a passion of mine since childhood, that rules and regulations, economies of scale, and technology have made every single car in the market look practically the same inside out and everyone’s just trying to come up with something a little better in specs.

All cars have those wide, gaping mouths with pseudo angry thin eyes upfront. Bloated widebodies and chopped-up rear end with teary-eyed tail lights. Inside, they’re all the same, a wheel with a bunch of rectangular screens.

The only thing differentiating most phones right now is how many trypophobic lenses circles there are for the cameras. Bring back the exciting Nokia, Ericsson, and Motorola days in design!

Back then, in order to connect to the “information superhighway” (ugh…), we had to:

Unfortunately, back then, there aren’t a lot of websites to visit and most people actually think that Internet Explorer was the shiznit of browsers too. There just weren’t a lot of things to do online.

Most activities occur on peer-to-peer chat groups, forums (aka “bulletin boards”), and even chat apps like mIRC.

The Internet was just too techy for the layman, much like how the Nokia Communicator and Palm Pilots were great products, but way too complex for most to use and adapt to their daily lives.

What made AOL so successful in the early days of the Internet wasn’t because they were faster nor were they cheap, it was simply the same formula as the iPod and the iPhone 3Gs, ease of use.

They stripped out all the techy jargon and removed regular PC users’ need to even enter Control Panel, let alone Network settings.

You get that free CD (or a diskette!) in the mail or almost any magazine, they’re distributed heavily in all university campuses, big-box electronic stores, Radio Shack, etc. Everyone has at least a few AOL CD-ROMs as coasters sitting around.

You put that CD into your drive, it loads a simple, single-button interface to install the software and you create an account much like any online account, no email needed, just pick a username and a password.

You didn’t need to sign up for internet service from your phone company, AOL is an internet provider as long as you have a modem and a phone line. As soon as you finish registering for your account, you hear that noise below and you’d be welcomed with the classic welcome email too.

Ahh, 3 icons that tell you you’re on the web!

Just like that, you now have email, instant messaging, community and topic interest portals, and of course, a browser that no one uses. Usually free for 15 whopping hours of use! They were like drug dealers passing out samples.

Within that world, you literally can chat with anyone in the US, find folks who have the same interests as you, and read collated information on those interests without whipping out your library card.

Look at all the places you can visit on one screen!

I see the metaverse as the decentralized AOL on steroids, basically.

If you look closely at what Meta (Facebook) has in store for their metaverse, couple that with Microsoft’s entry to the metaverse using VR with their Office and Teams collaboration suite, and Disney’s confirmation of their metaverse involvement, it’s not hard to see how each button block you see in the AOL screen cap above could very well be dominated by one of the current tech and media giants in the future.

Within it, your avatars and data are cross-shared among the infinitely expandable space wherein you can hop from work to workout to games without leaving that space.

Neo would not be happy to hear this.

Imagine stepping into the “Musicspace” metaverse and not only will you get access to Spotify-like music options, but actually be in a jazz bar with hundreds of other jazz fans. You can chat and even trade records and fan art NFTs while watching a popular musician play live.

Or enter the “Style Channel” metaverse and the virtual Fifth Avenue presents itself where you can walk in and out of stores, try out clothes and accessories virtually through AR (augmented reality) or VR and make your purchases right then and there without tedious reading of product pages or waiting for slow customer support as these stores have live avatars (be it AI or actual humans) serving your custom needs.

Or you’re playing a Roblox-like game with your kids in the gaming metaverse and as soon as their bedtime kicks them out of the game, you walk across the meta world and start shooting cowboys in Red Dead Redemption 6.

The possibilities are endless.

You’ve probably read that there already are virtual real estate sites on the metaverse selling plots (pixels, to be accurate) of flat land to build future metaverse properties on. You can also rent these plots of land if you can’t afford to own your own land, or even invest in REITs (real estate investment trust) shares on these properties.

Technically, almost anything in the physical world should be transferable in the metaverse, and that’s cool.

Let’s face it, this is still a long way from mainstream reality. The concept of virtual worlds and VR were so common and hyped-up in the 90s and despite all the tech advancements we’ve had the past 30 years (yes, the 90s were 30 years ago as of this article!), our headsets still stink, they’re still a dizzying nausea-generating gadget that costs hundreds of dollars that have limited usage beyond entertainment.

Having said that, it was purely an obscure, side project meant for entertainment back then.

Now that we’ve reached the internet’s plateau, finding practical, real-world, and most importantly, commercial use cases for the virtual world makes sense.

I don’t think headsets will be here to stay, no one wants to put on glasses for important things, let alone for entertainment, why do you think 3D TVs and movies never took off?

Are there inherent risks and challenges? For sure!

I can’t even imagine how complex security and privacy measures will be regulated and policed. Imagine the fact that people will be able to not just see what’s behind your webcam, they can virtually walk around your entire house somehow, manipulate IoT (Internet of Things) devices, look into your private data, etc. with greater accuracy and ease than before.

And as if we’re not sedentary enough, being strapped onto a headset or having some form of heads-up display or hologram in front of us will just make us lazier than ever.

Why live in our crummy studio apartment with 20-year-old furniture if our metaverse home looks like a fresh Ikea catalog placed in front of a gorgeous lakeshore?

We’ll just be sitting around doing our work, entertainment, communication, and chores while our IoT devices and robotics hand us everything physical we need.

Dystopian? Maybe… We’ve shown as a species that we’re generally OK with it.

Am I excited about the metaverse? Heck yeah, especially with the bumps and challenges at the beginning. Hopefully, I’m gone by the time Wall-E and his gang take over.

This site uses Akismet to reduce spam. Learn how your comment data is processed. 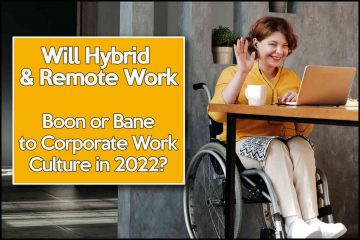 Did Hybrid and Remote Work Improve Corporate Culture or Gave Presenteeism and Bias a Boost?

I watched a segment on hybrid and remote work maturing in 2022 by The Economist triggered some interesting questions that many of us haven’t had much thought of. The impact of remote and hybrid work Read more…